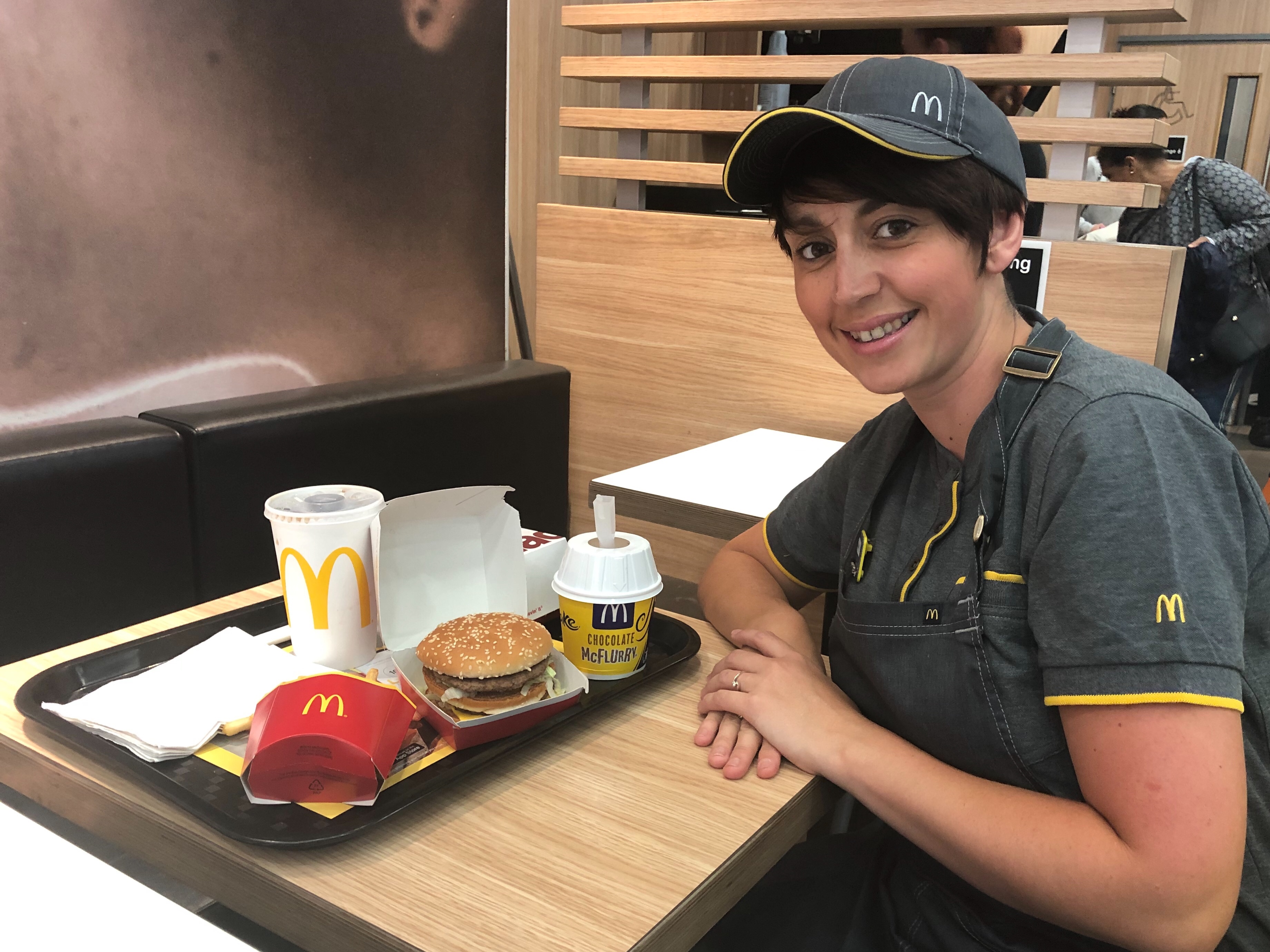 I recently had the opportunity to visit my local town centre McDonald’s restaurant, meet the franchisee and some staff, I even had a tour and made my own Big Mac! I am so happy that he chose me! Everyone loves a McDonald’s treat especially my children.

I met Darren Price at his restaurant on the High Street in Oldham’s town centre, he was extremely friendly, and he couldn’t wait to tell me all about his business. I soon realised how much Darren enjoyed his job. He explained to me how after studying Business Studies in Huddersfield, he has been working within McDonald’s since 1988. The opportunity arose to become a franchisee in 2016 and he has never looked back.

Darren now owns two McDonald’s restaurants, the one on the High Street and the drive-thru at Elk Mill and between those stores, he hires around 220 people which I was surprised at. We talked about the employee benefits that McDonald’s employees can get from bonuses to private healthcare. He spoke about his business with such passion.

When he talked about his teams at both restaurants, he seemed extremely proud of his staff. He talked about how he loves to reward them, sometimes with a game of bowling and a meal!

We went on to discuss what he, his team and McDonald’s dofor the wider community. Not only do McDonald’s staff go out litter picking in the town centre a couple times a day, but throughout the year large organised litter picks are arranged to help keep the town tidy.

Darren also mentioned working with Mahdlo, the Oldham based non-profit organisation that works with young people, aged 8-19. From providing mock interviews, giving help with CV writing, offering work experience and even hiring new staff. He has worked with the wider community in many ways.

Before taking a tour behind the scenes, I met floor manager Mark. He started by telling me how he came to work for McDonald’s five years ago, starting as a work experienceStudent. I was really impressed to hear his story, of how far he’s come in 5 years, from work experience, to crew member and to manager. He proves that for those that want it, the opportunities for progression are there. He even went on to say that McDonald’s has made him who he is today. The fact that he enjoys his job shone through as he spoke. Mark also volunteered in the past with Mahdlo, speaking to young people and children about his story with McDonald’s as a role model.

Next we went on the restaurant tour, but first I needed to look the part, so I changed into my very own uniform in the crew room. I even had my own Trainee name badge! Right, I was ready to see behind the scenes.

We first looked around the store rooms, freezer and chiller. Everything was very organised and extremely tidy which helped towards the smooth running of the day to day tasks.

It was great to see that in all store rooms, everything was kept in cardboard which all can be recycled. Mark showed me two large cages filled with cardboard which is collected. In 2018, 22,000 tons were collected from McDonald’s restaurants for recycling. That’s the equivalent to saving about 374,000 trees!

Next Mark pointed out the large blue barrels containing grease and oil generated from the restaurant which is collected during each delivery. In 2018, 2.9 million litres were collected across the country and converted into low grade fuel that helps power the recycling plant creating their bio-diesel. Amazing!

Mark also showed me some of the technology that’s used every day. Firstly, we checked out the touch screen order points where customers can order and pay for their meal themselves. McDonald’s customers can now even choose to have table service which I think is fab, especially when you’re visiting with children. The tablets they now have dotted around also makes trips with children easier. My three love playing a game or two whilst they wait for their food.

Some new technology Mark explained to me was McDelivery via UBER Eats. Customers now can have the option of having McDonald’s delivered through UBER Eats to their door! He showed me the little tablet next to the till that has any McDelivery orders on for them to process. Pretty impressive.

Throughout my visit, I found out a few things that the average McDonald’s customer may not know, and I thought I’d share a few things with you!

Next we headed to the kitchen where I was given the task of making a burger of my own choice. Well, it had to be the Big Mac! Mark showed me what to do and I tried to keep up. First, we toasted the bun, whilst we waited, we made sure we had a Big Mac box ready. Then three squirts of secret sauce on each side before some lettuce and gherkins, and that’s done! I was pretty impressed if I say so myself, Mark even said it was better than his Big Mac. I got myself some medium fries and then even got to make a Smarties McFlurryfrom the new Summer Collection. It was lots of fun, but very fast paced even though I was only making mine and it was a quiet part of the day. I could imagine a new starter feeling overwhelmed and in the way (like I did), but Darren’s crew explained how they all work together where they have a rota and set places to manage and they have a buddy system for trainees so they’re never left alone which was great to hear.

After taking some time out to enjoy my food that I made, Mark decided to let me have another go at making something. This time I made a chicken wrap from the summer collection. The Hot Cajun Chicken One featured crispy chicken breast or grilled chicken with a Cajun sauce pepper Jack cheese, tomato, jalapeño slices and lettuce in a soft toasted tortilla wrap. It looked delicious!

Overall, I had a brilliant couple of hours behind the scenes at the Oldham McDonald’s. Darren and his crew were very welcoming, and I had lots of fun. I got a real sense that Darren and Mark in particular really enjoy the work they do each day. I also learnt lots about just how much McDonald’s care about its sustainability, its staff and the wider community.

I would like to thank Darren, Mark and the team at Oldham McDonald’s for having me behind the scenes.