I’ve been looking forward to seeing this show for some time as I’ve heard so many good things about it. The Lowry offered me two press night tickets so my brother and I eagerly took our seats! 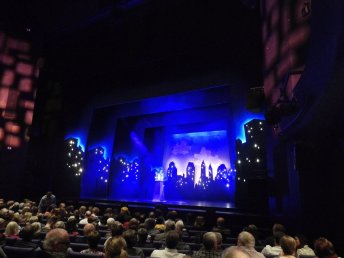 Produced by Mischief Theatre, The Comedy About A Bank Robbery follows a couple of crooks back in the 1950’s, as they plot to steal a diamond from the Minneapolis City Bank. But of course all is not plain sailing for these bumbling crooks in this laugh out loud comedy.

Mischief Theatre was founded in 2008 by a group of LAMDA students. Since then the company has written and performed in the West End all over the world including the well known The Play That Goes Wrong which won Best New Comedy at the 2015 Laurence Olivier Awards.

Written by Henry Lewis, Jonathan Sayer and Henry Shields, The Comedy About A Bank Robbery has been hailed ‘as the funniest show in the West End’ by The Telegraph. Right from the off is full of moments of slapstick, terribly funny and ridiculous puns and the most awful disguises you have ever seen! One of the writers, Jonathan Sayer is originally from Manchester, he even went to my school!

One of my favourite scenes would have to be the fight scene between three people. Although this fight scene was acted out by only one person! Just imagine it! It was a brilliant and hilariously funny scene!

The staging, although seemed quite makeshift at times was also extremely clever. The cast moved a lot of the set themselves , whilst barber shop type singers filled the gaps. The car chase and the underwater scenes were amazing to watch and very clever how they were portrayed on stage.

The entire performance was full of passion and energy from the cast, it seemed like each of them truly love what they’re doing and enjoyed every minute of it.

The work from Mischief Theatre is actually brand new to me. I can’t wait to see whats next from them and check out their previous work.

The Comedy About A Bank Robbery is on now until Saturday 15th September at The Lowry Theatre Manchester. You can find out more information and book tickets here. Also check out what else is on at The Lowry!