Ben and Holly’s Little Kingdom Live on Stage! There will be dancing, singing and there’s always a possibility of a jelly flood when magic is involved!

Me, my toddler twins and my sister travelled to St Helen’s Theatre Royal to see Ben and Holly’s Little Kingdom Live on stage. We knew the show is from the makers of Peppa Pig which we loved when we saw it last year, so we had massive hopes for this show!

Before taking our seats, Oscar and Isla excitedly grabbed the opportunity to get a photo as Holly a Fairy Princess and Ben the Elf!

All three of my kids have loved Ben and Holly and it’s one that I love too:

Holly is a young Fairy Princess, who is still learning how to fly and her magic doesn’t always go quite according to plan. Her best friend, Ben the Elf, doesn’t have wings and he doesn’t do magic, but he runs very fast and flies on the back of Gaston the Ladybird. They live in the Little Kingdom, a tiny land where flowers and grass rise high above them and every day is an adventure.
Join Ben and Holly, and their friends on this exciting, enchanting and magical musical adventure packed full of games, songs and laughter.

Throughout the show theres plenty of bright colours on stage and music throughout! The children could clap and sing-a-long to many songs, my two were even dancing in their seats!

There were squeals with delight when a litttle bit of fairy magic changed Ben into a frog! or when Gaston’s dirty cave was made nice and clean all with a flick of a wand!

I was extremely impressed with the use of pupperts when Ben, Holly, Mrs Plum, Lucy and Gaston needed to fly home. The stage went black and little puppets flew across the stage in a clever scene.

All our favourite characters made an appearance and there was plenty of audience participantion to keep the little ones interested. 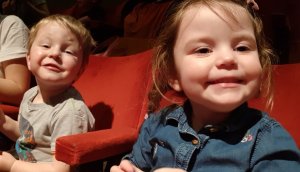 After the show had finished, my two were extremely lucky to have the chance to go on stage and meet the cast! Oscar was a little overwhelmed but Isla was in her element, even stopping to give Holly a high five. We had a lovely experience, I love being able to take my young children to the theatre.