The Jersey Boys are here in Manchester until Saturday 16th February and I was lucky enough to catch the show at the Press Night performance this week. There was a real buzz around the theatre too!

Jersey Boys isn’t a musical I have seen before or that I knew much about although I had heard great things. As you know, I do love musicals so I was pretty excited to head to the Palace Theatre in Manchester.

Jersey Boys the musical is based on real life. It tells the story of when four men met back in the 1960s, Franki Valli, Tommy Devito, Bob Gaudio, and Nick Massi- better known as the Four Seasons. The story follows their journey to fame, the highs, and the lows.

I expected to know a few songs but I was shocked at how many well-known songs Frankie Vallie and The Four Seasons had! Hit after hit, the entire audience recognised the songs and even danced in their seats.

The singing throughout was outstanding but special mention obviously must go to Michael Watson who played Frankie Valli. He has a fantastic voice which felt effortless. There were several scenes where Frankie would sing and perform a song then go straight into an acting scene before singing again and so on, all without a break or leaving the stage. His entire performance was flawless.

The Jersey Boys set was very clever. There was a large screen at the back of the stage that changed with each scene displaying different clubs signs or even live footage of the band. Furniture and other items of the set would slide on and of the stage as scenes changed, the story flowed well and was fast paced. 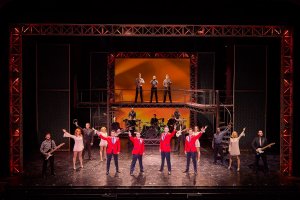 The big numbers were fantastic and amazing to watch and listen to, hits such as ‘Big Girls Don’t Cry’, ‘Walk Like A Man’, ‘Bye Bye Baby’ and ‘December 1963 (Oh What A Night)’.

Jersey Boys is touring the UK now and is at The Palace in Manchester now until Saturday 16th February. See here for more information and to book tickets.