I was so excited when me and my family got invited to Winter Wonderland Liverpool.  Me and my two-year-old twins recently took a little roadtrip to Liverpool to St Luke’s Bombed-Out Church to enjoy the magical experience.

We arrived at the church which looked lovely, there was plenty of fairy lights and even little food stalls in the grounds. The interior of St Luke’s had been transformed into a Winter Wonderland. We headed into the entrance were we were soon greeted by one of Santa’s elves and Mrs Claus herself, we found ourselves in Mrs Claus’s Art Studio.

The room was lovely, very Christmassy! The kids all sat down to write a letter to Santa, to make Christmas cards and to colour in some lovely Christmas decorations. My little ones really enjoyed this, there was plenty of crayons, pens, stamps and stickers, they had so much fun!

After the children finished their Christmas arts and crafts, we followed Santa’s elf through a magical wardrobe! As we walked through we were transported to a magical Storyland where we sat on comfy cushions around a festive Christmas tree with elves Noel and Carol!

The children and the elves first made up their own story about Santa and everyone had a chance to join in. Each child picked a candy cane treat from the tree before the elves read a Christmas story and we even enjoyed a sing song!

We were next escorted by one of Santa’s elves into a fantastic room full  of dressing up clothes! The elves explained how we needed to get ready for the silent disco so we all tried on many different costumes before practising our dance moves!

My pair really enjoyed this, especially Isla who kept alternating between a unicorn headband and pink sunglasses to fairy wings and a pearl necklace! haha.

We tried for a group photo (my two were too busy with their costumes) before heading through to the silent disco. Children and parents were all given a set of headphones and soon we were dancing to Chritmas tunes! We danced to Cha Cha Slide and Superman too! I think this was one of our favourite parts of the evening, my two had so much fun! I did too. 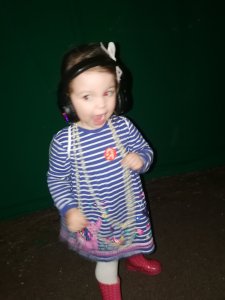 Once we had finished dancing we were off to see Santa himself! Behind a large red curtain was Santa’s grotto which was decorated lovely, it looked warm and very magical. There was two friendly eleves inside as well as their real life labrador (to my children’s delight).

The elves greeted us and asked my children had they written a letter to Santa. We got the letters out and they both handed their letters to the man himself. Santa was extremely jolly and read out my children’s letters, taking the time to talk to them both. We had a family photo and after a little chat with Santa we were saying our goodbyes.

We had a wonderful experience, from start to finish, we had a magical time! This event is lovely for families and we had so much fun.