You may have read my recent post about the giant Bee sculptures that are buzzing around Manchester over the summer? Well we decided to have another day of bee hunting. We were at The Lowry theatre in the morning to see What The Lady Bird Heard, which was a fantastic show, the kids loved it. Joshua checked his map and we soon realised there was plenty of bees to be found around that area!

After the show, we had a search around The Lowry theatre for the Little Bees that were nesting in there. We soon for these two little guys near the entrance, you can find out more information about these little bees here. 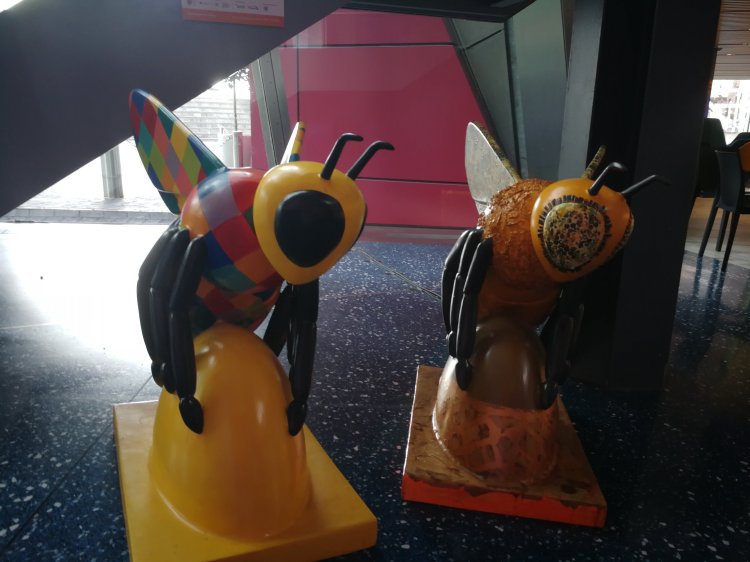 We next headed upstairs to the galleries where we found three more little bees. We will definitely be back to visit the galleries at The Lowry as we have never been before. The Lookout looked great for kids, there seemed to be arts and craft activities too! 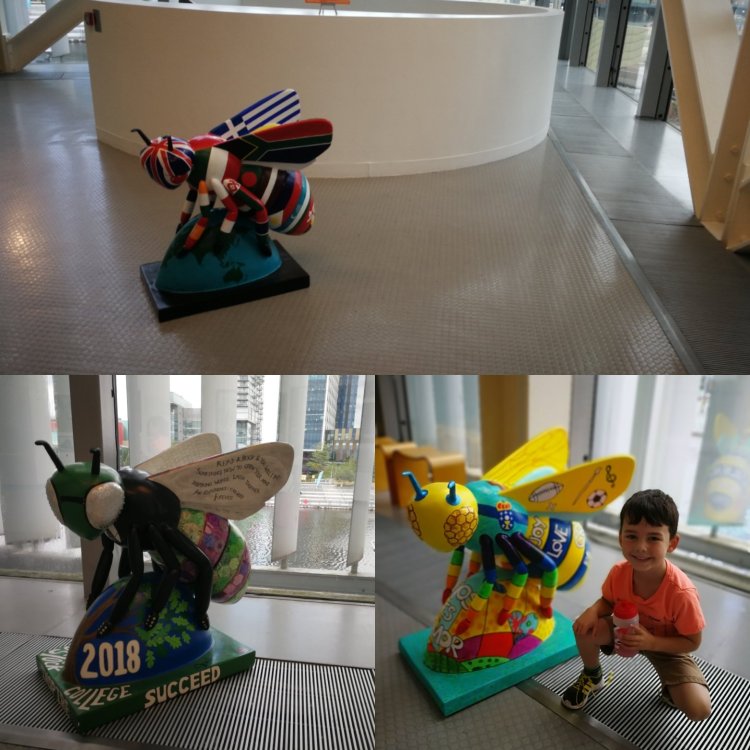 We knew there was a Big Bee somewhere around The Lowry as we soon spotted it as we walked into The Lowry Outlet Mall. Beedazzle was designed by Maria Shrigley and is here to sparkle with Manchester!

On the upper floor of the outlet mall we found 18 Little Bees to the delight of my children! They looked great all clustered together, so bright and colourful! It was lovely to watch families come to take photographs and even see children get excited when they saw the Bees on display that their school had helped design.

We left The Lowry and headed towards Media City UK were we first came across this fantatsic Bee, which is my son’s favourite, Gravit-Bee. Inspired by the fact that bees are renowned explorers and usually travel up to two miles from the hive to seek out pollen, the designer Lauren Buffery dedicates it to one of the pioneers of space travel, Buzz Aldrin. 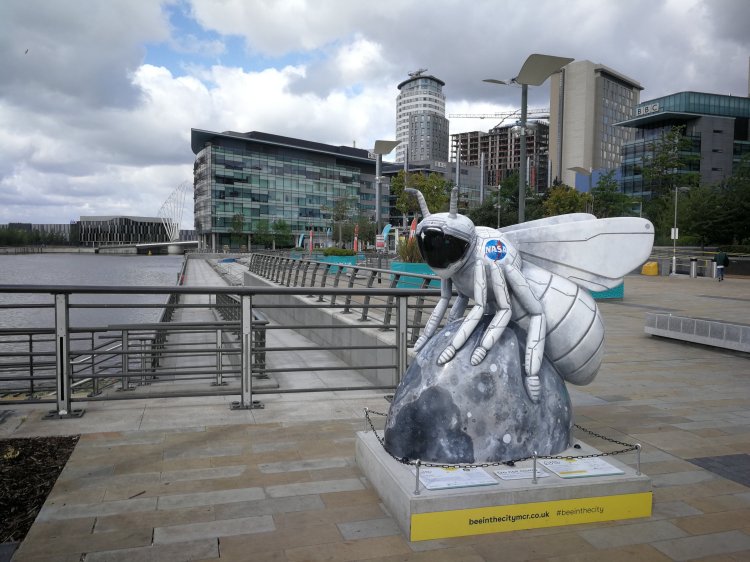 We found Blue Bee-ter close to the Blue Peter gardens in Media City UK. This bee was designed by Jodie Silverman and is in fact inspired by a blue bee found in Southeast Asia, India and China.

Whilst we were at Media City UK, we thought we would have a look around as we haven’t been there for a number of years and not with the children.

The kids loved it! They enjoyed seeing the Upsy Daisy and Pudsey Bear statues! We also had a nosy round The Studios. We saw the brightly coloured umbrellas that are on display as part of an initiative to raise awareness of ADHD and autism, it was a very impressive display! The kids loved posing at the countdown clock, The Rovers Return and at the very large TARDIS!

We also had a walk around the lovely Blue Peter garden. This iconic garden was placed here in 2012 so that members of the public can enjoy it.

We next drove to Old Trafford football stadium in search of the next Bee! We have a lot of United fans in my family including Joshua so he was having lots of fun! Bee United was designed by Joseph Venning and sponsored by Manchester United Football Club. The Bee celebrates the club and it’s greatest players and managers.

The next Bee we found was in Stretford, St Bride’s Way, where we found Bee Together. I love the design of this Bee as it includes the fingerprints of local school children, residents and people of all ages which have been transformed by the artist into small bees. The Bee was designed by Lynda Sterling and sponsored by Limelight Trafford.

We left the Old Trafford area and headed to another football stadium, the Etihad Campas. We immediately found two Bees outside The National Squash Centre. Bee-Longing was a beautiful Bee filled with butterflies and rainbows. Designed by Neequaye working with the Rainbow Haven Community, it symbolises hope, comfort and kindness. The second Bee we saw there was called Mo, designed by Donna Newman, this Bee was designed in remembrance of a wonderful woman called Mo Done. She was an inspirational woman, a great Mancunian and a supporter of many Manchester charities

Outside the Eithad stadium we found Mike Summer-Bee. Designed by Adam Pekr-Inkversion, this Bee is based on City’s distinctive, new sky-blue home strip and it celebrates the club’s Premier League-winning 2018 season. As you can see from the photo below, Joshua wasn’t that impressed as he’s a united fan! Haha.

The day before we visited the National Cycling Centre which just across the road from the Etihad Campas. Outside was the Big Bee, I’d Rather BEE Cycling. This beautiful bee was designed by Jessica Perrin and celebrates the success story that is Manchester and it’s rich sporting heritage.

Inside the cycling centre were these fantastic Little Bees, there were 10 in total. These looked great and the kids loved them. 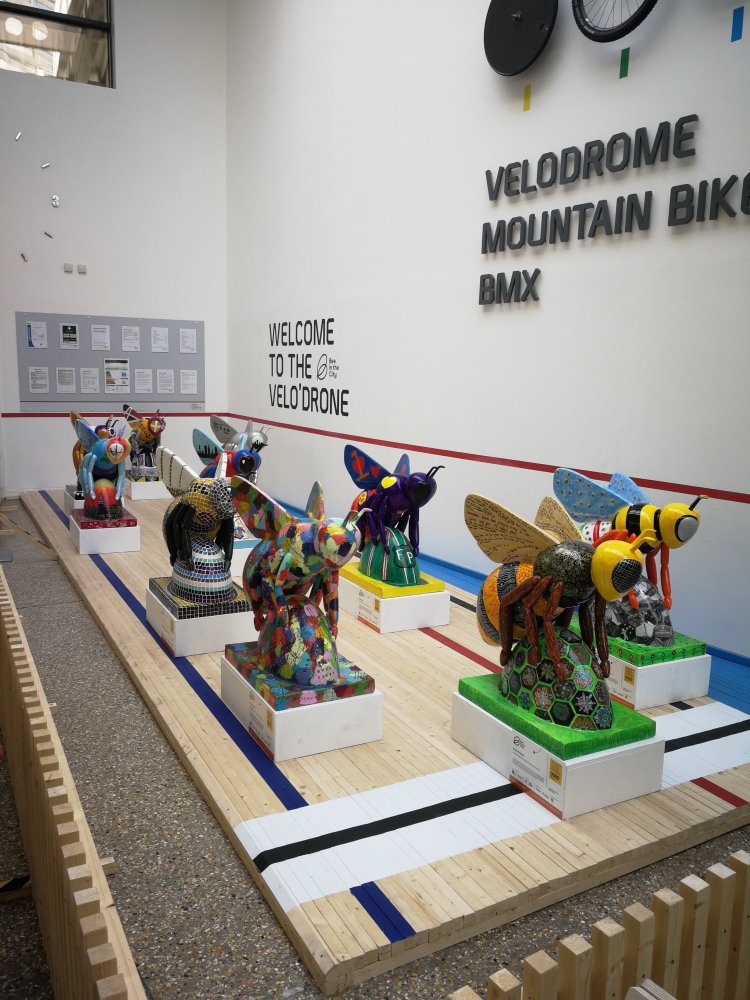 This little guy was one of my favourite Little Bees.

We are hoping to continue our bee hunt over the next few weeks! Happy Hunting!