We flew into Manchester this weekend to check out the giant Bee sculptures that are around the city centre. They buzzed their way to Manchester on the 23rd July and will be around until 23rd September so there’s plenty of time to head out to find some! I had seen a couple of the bees on my way to work and thought they were fantastic! I knew the kids would love looking at there colourful designs and Joshua loves a trail with a map.

Together with local communities, schools and colleges, Manchester City Council and Wild In Art have brought over 100 Bees into the city for ‘one of the most spectacular public art events the city has ever seen.’

We couldn’t wait to start this free family-fun trail around Manchester. The bees have been designed by different artists and ‘celebrates the unique buzz of Manchester, from its industrial heritage to its vibrant music scene’. We parked near the Manchester Arena and headed towards the Cathedral.

The first bee we came across was Workee. This worker bee was designed by Liverpool artist Nicki McCubbin. This bee and design recognises all the people who work hard to built and develop the City Centre. 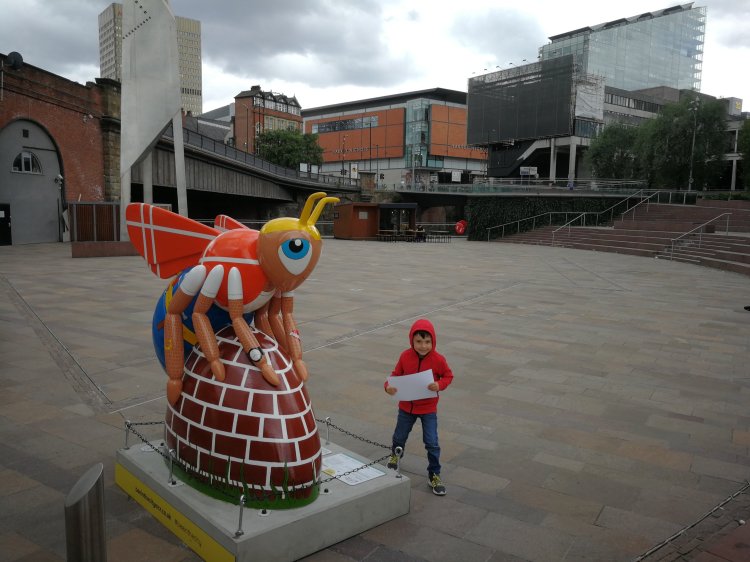 Next we saw The Bee of Hope, Community and Respect outside Manchester Cathedral. This bee was designed by artist Barry Spence who took ideas from the students at The Radclyffe School in Oldham, they believe in hope, love, community and respect. Ariana Grande’s lyrics are also on the wings and 22 flowers represent those who lost their lives. 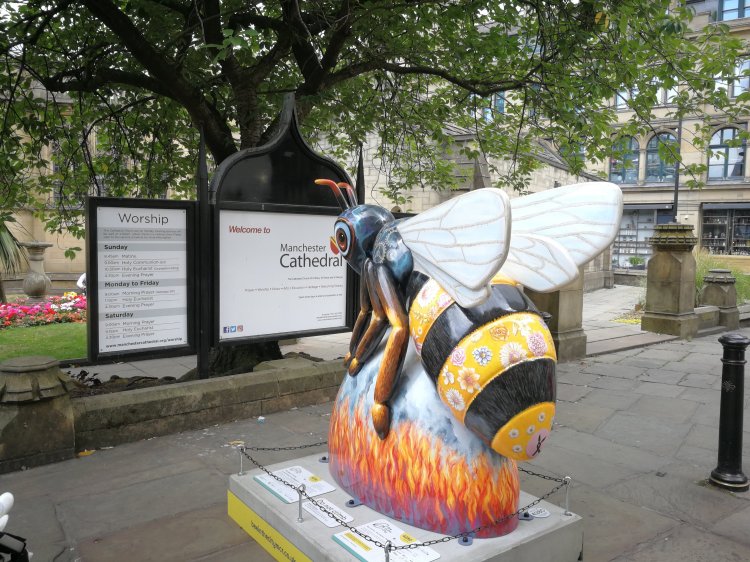 Outside the National Football Museum was found Mr Bee’nn. Designed by Mik Richardson, this bee is to remind you of children’s TV and book character Mr Benn! 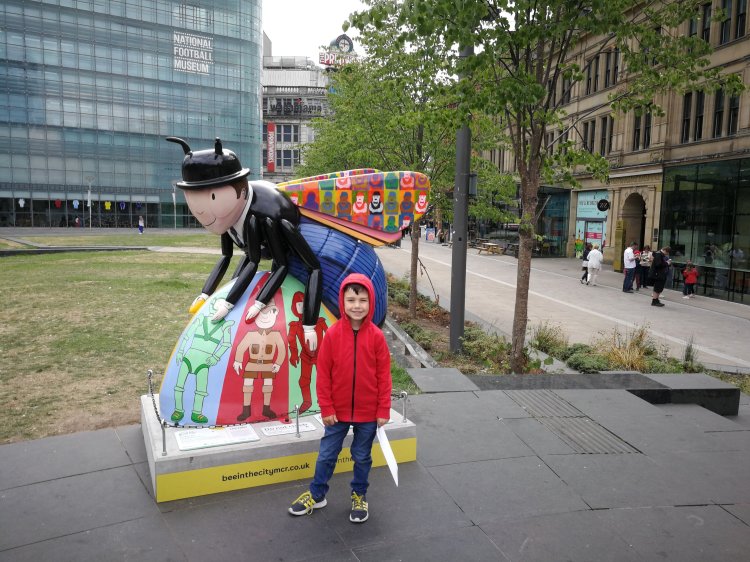 Next we saw The Drip-bee inside a shop window of the Corn Exchange. This one was very pretty and was designed Kristian Movahed and sponsored by Wild In Art. 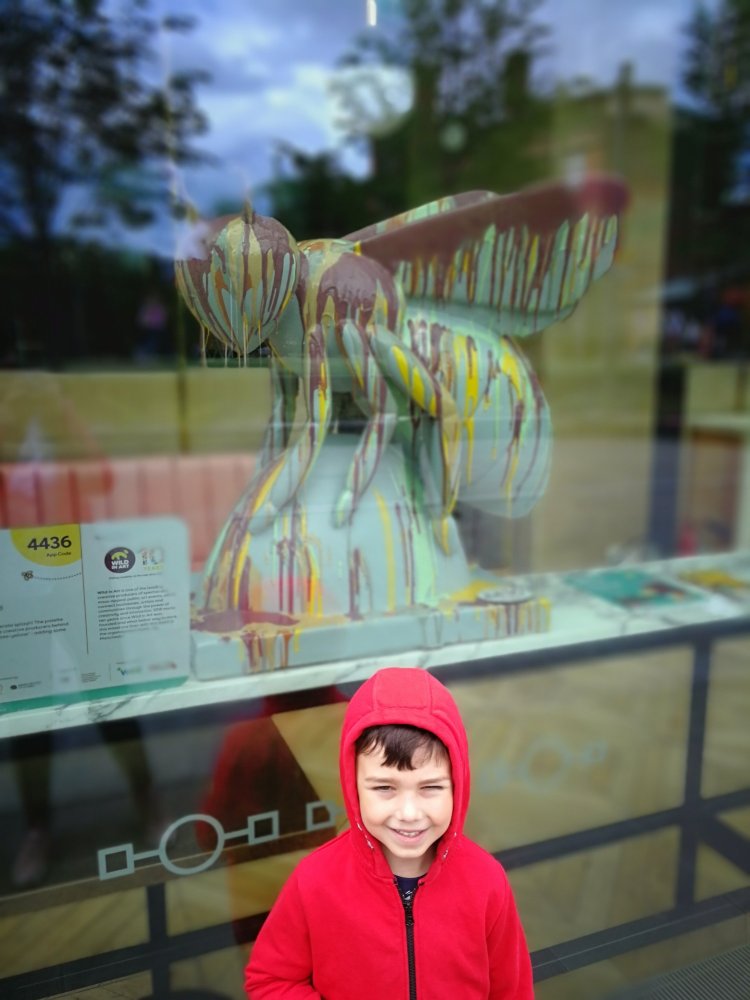 We headed inside the corn exchange in search of more bees. I had to stop and appreciate some of the art work on the walls! 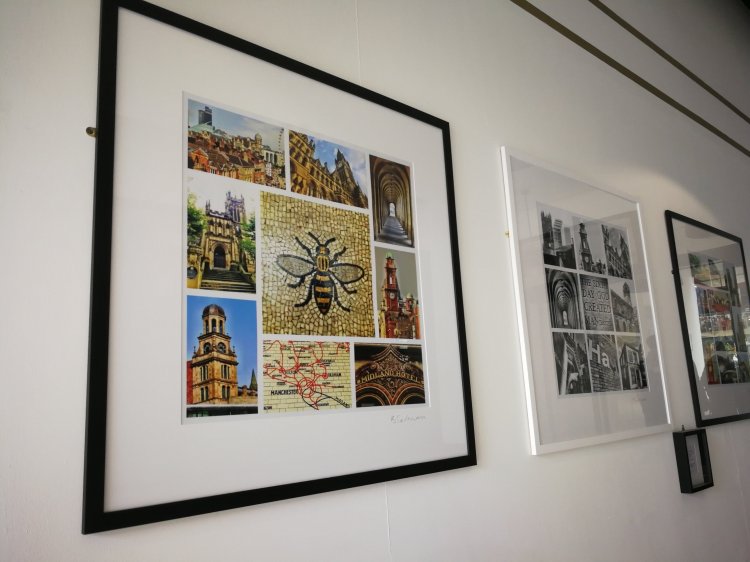 The next bee was very eye catching in black and white. Rock ‘N’ Roll was designed by Manchester legend Liam Gallagher with Julie Dodd. The bee is covered in musical sound waves and even signed by Liam Gallagher. 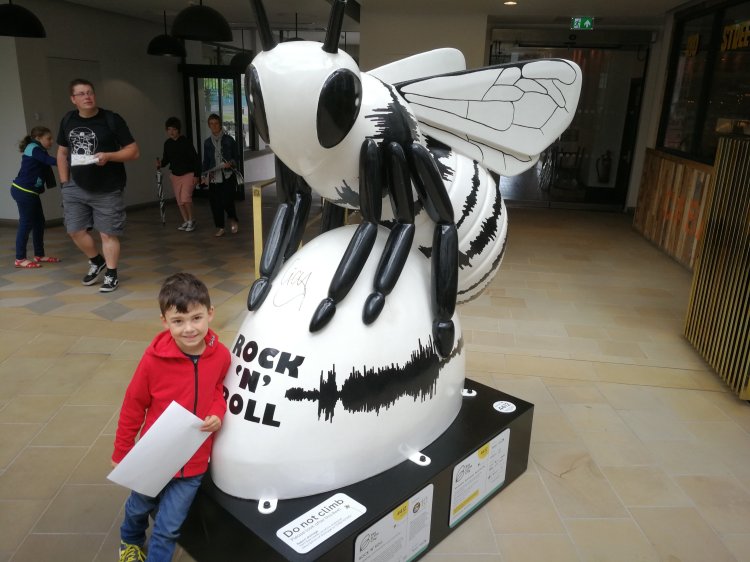 We also found The Honey Dome bee in the Corn Exchange. This bee was very striking in appearance with it’s rich gold and purple colours. The designer, Deven Bhurke wanted the bee to relate it’s surrounds of the Corn Exchange, giving it a fresh modern twist. This was one of my husbands favourite bees, he thought it looked fab in it’s surroundings. 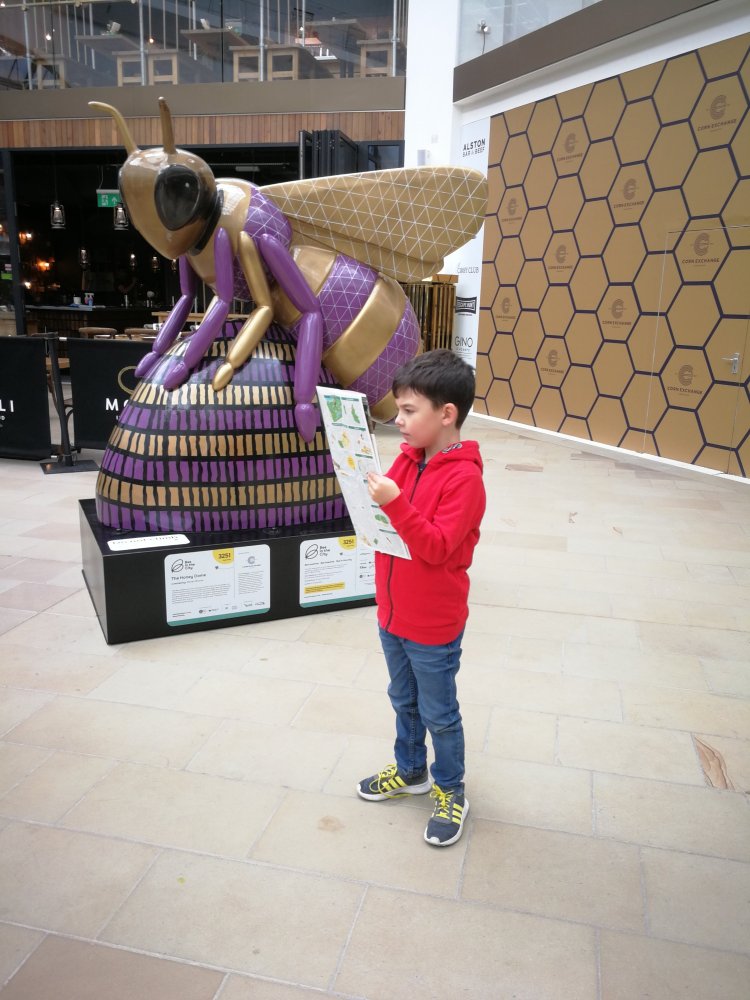 We headed back outside and towards The Printworks, before crossing the road we found this colourful bee, Penny Pendo-bee-no. Designed by Jenny Leonard and sponsored by Virgin Trains, this bee is named after one of Virgin’s Pendolino trains. 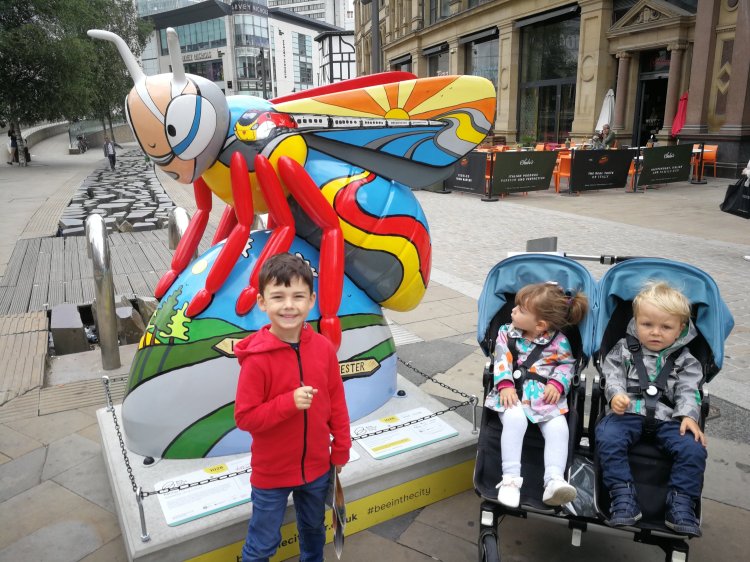 Inside The Printworks we found another bee, Hac BEE enda. Designed by Justin Eagleton, the bee depicts a club scene, The Haçienda and ‘Madchester’. 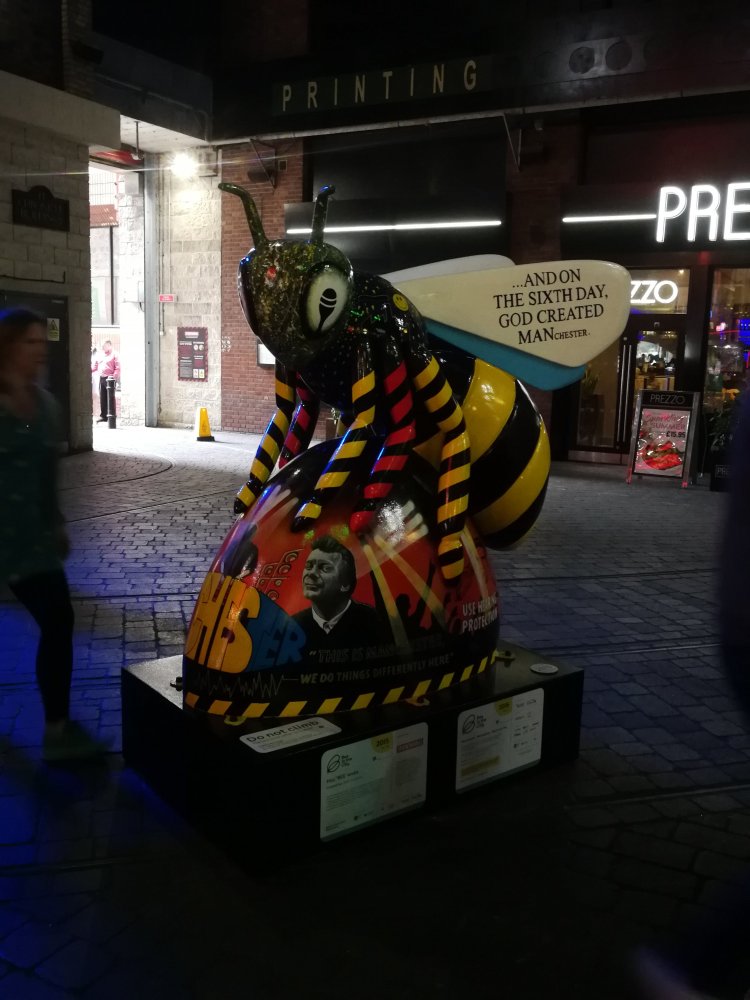 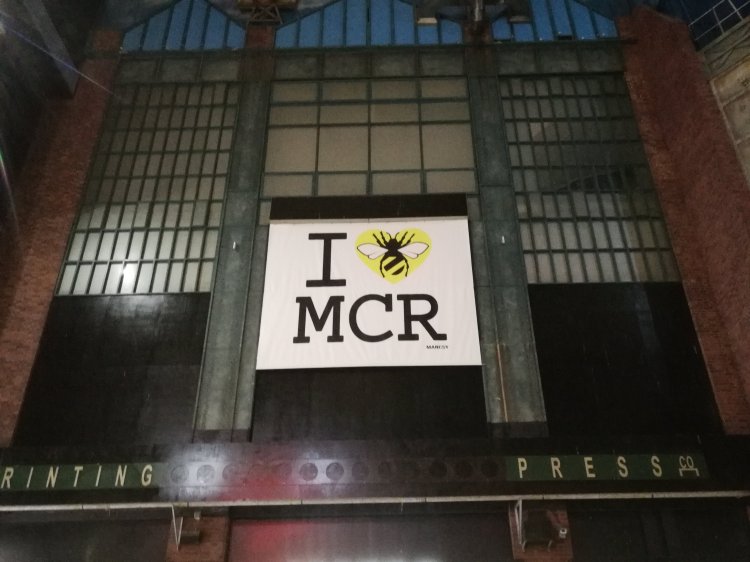 We walked towards Selfridges next where we came across the bright The Yellow Bee! This bee was designed and spray-painted by Selfridges. ‘The Yellow Bee’ symbolises their commitment to a brighter, more sustainable future. 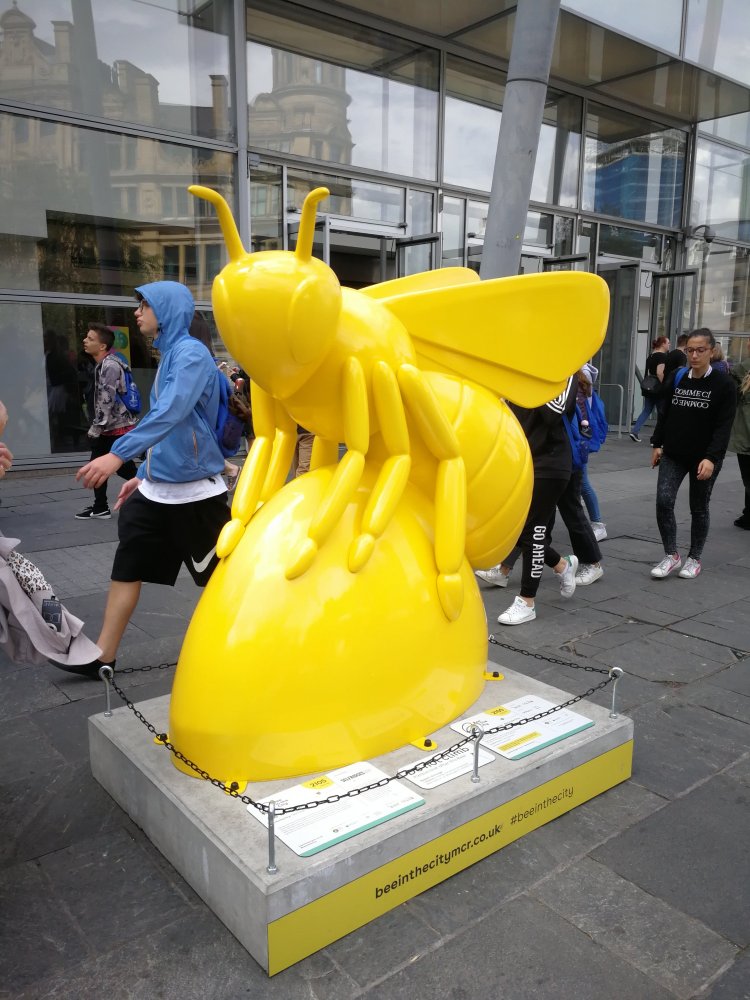 Me and Joshua wanted a selfie with the next bee, we loved it’s colours. Bee a Rainbow was designed by Rachel A Blackwell and symbolises hope perched upon a sky of dreams! 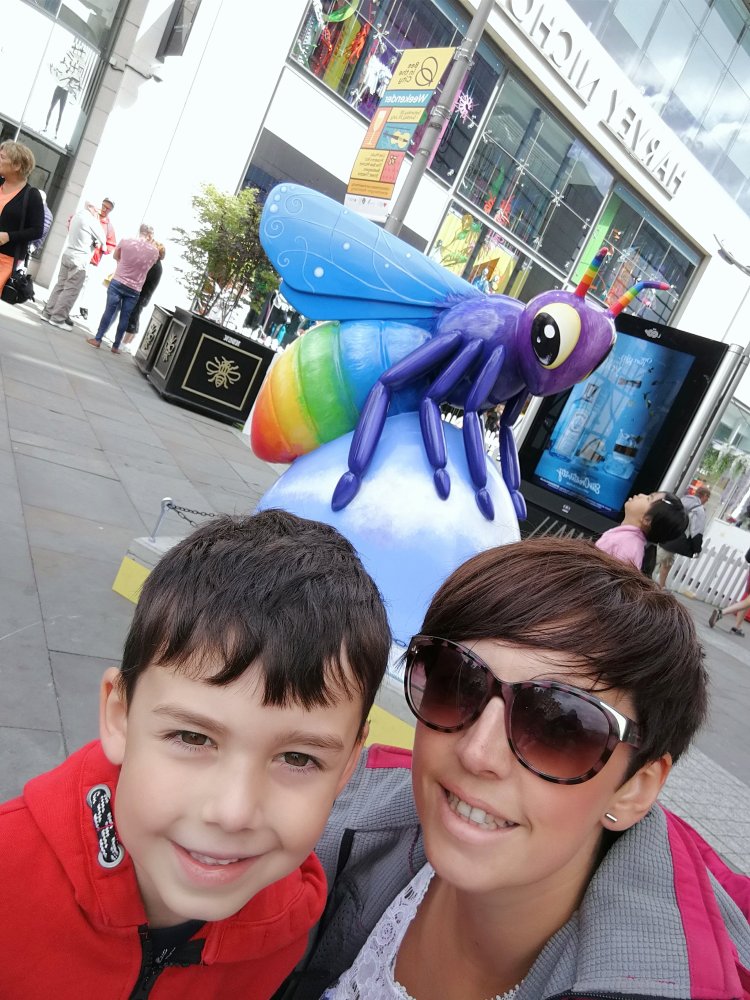 There was lots going on around Harvey Nichols and New Cathedral Street. There was things to do, eat, drink and even listen too! There was a bee market, selling everything bee related! 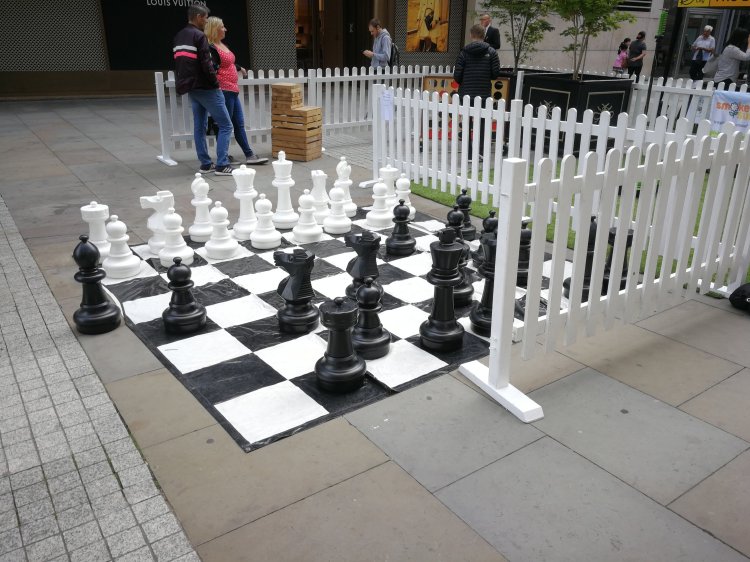 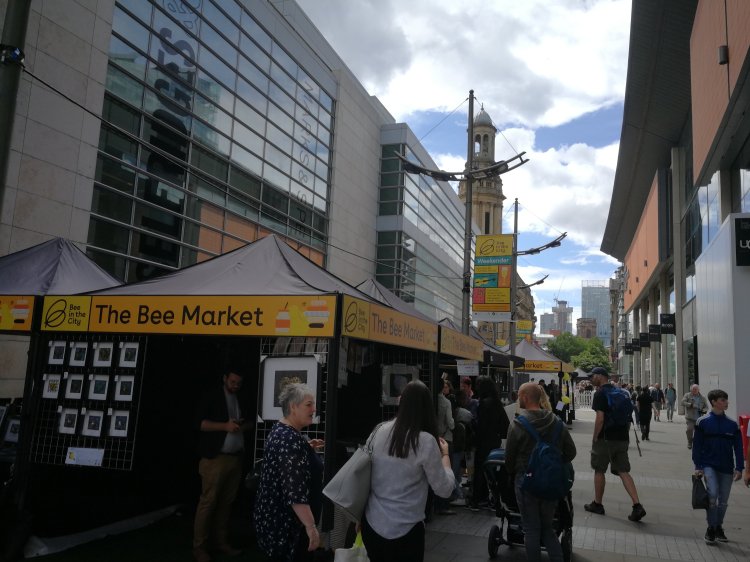 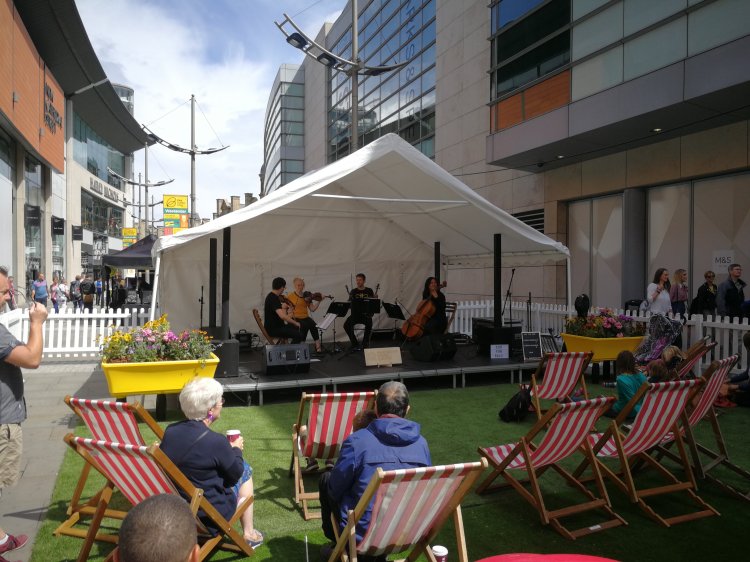 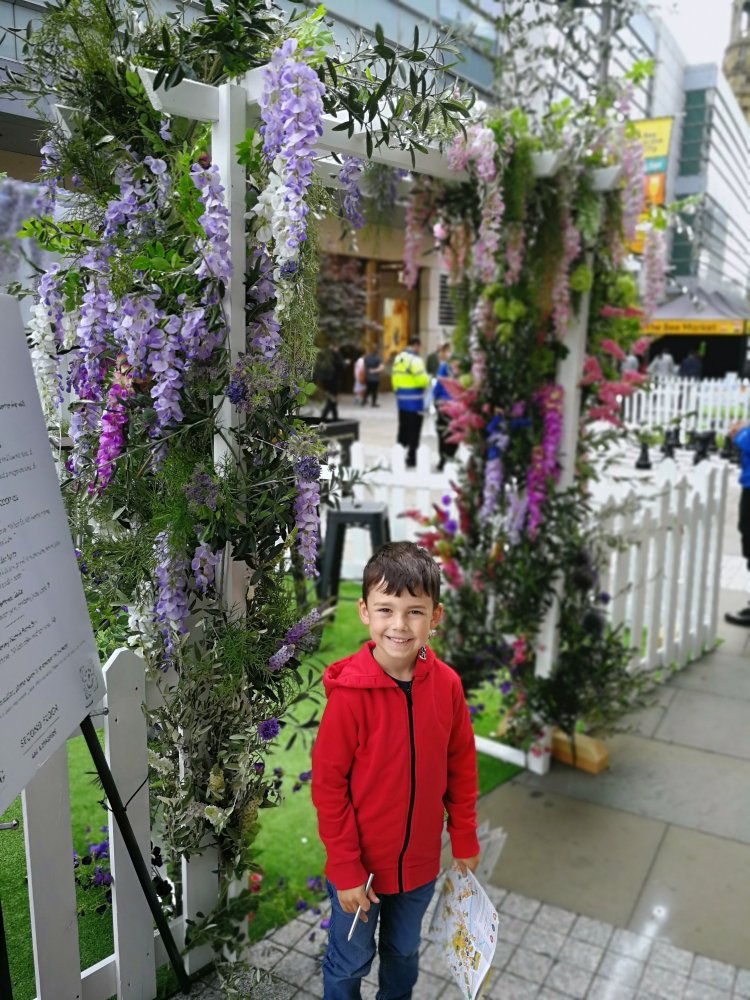 At the end of New Cathedral Street we found the SuperBee. The SuperBee symbolises the worker bee watching over Manchester like a Superhero and was designed by Adam Pekr-Inkversion. 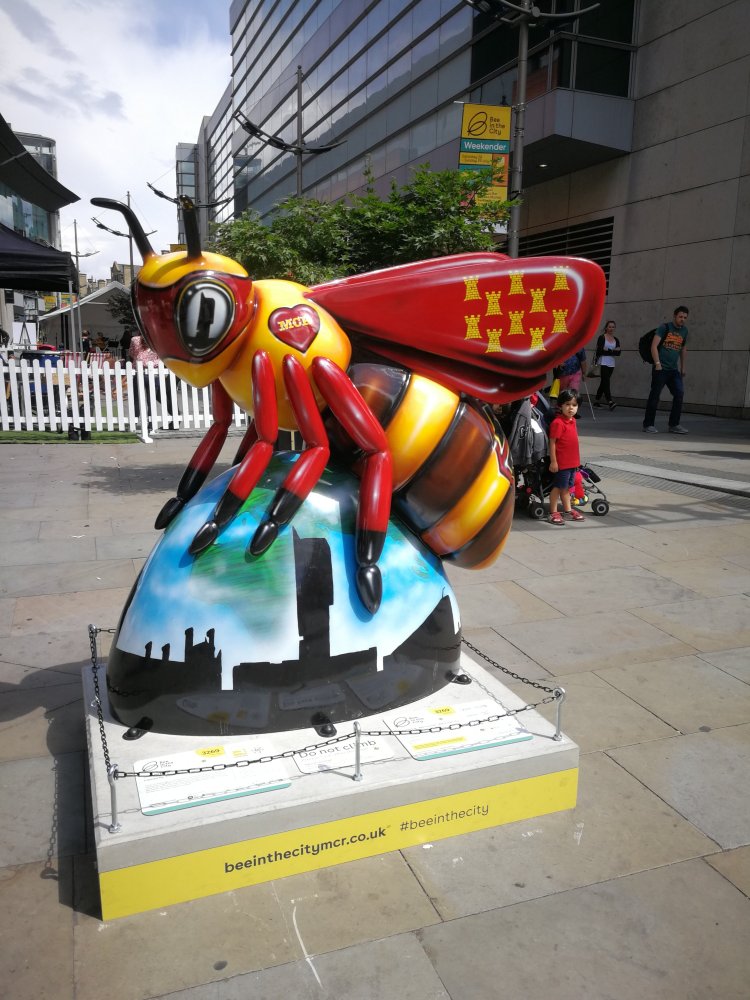 The next one found in St Ann’s Square and designed by Meha Hindocha, is my favourite one out of the ones we saw that day. It’s vibrant colours are fabulous and it is lovely to look at. This colourful bee is inspired by Manchester’s ever changing skyline and the people that make this great city. 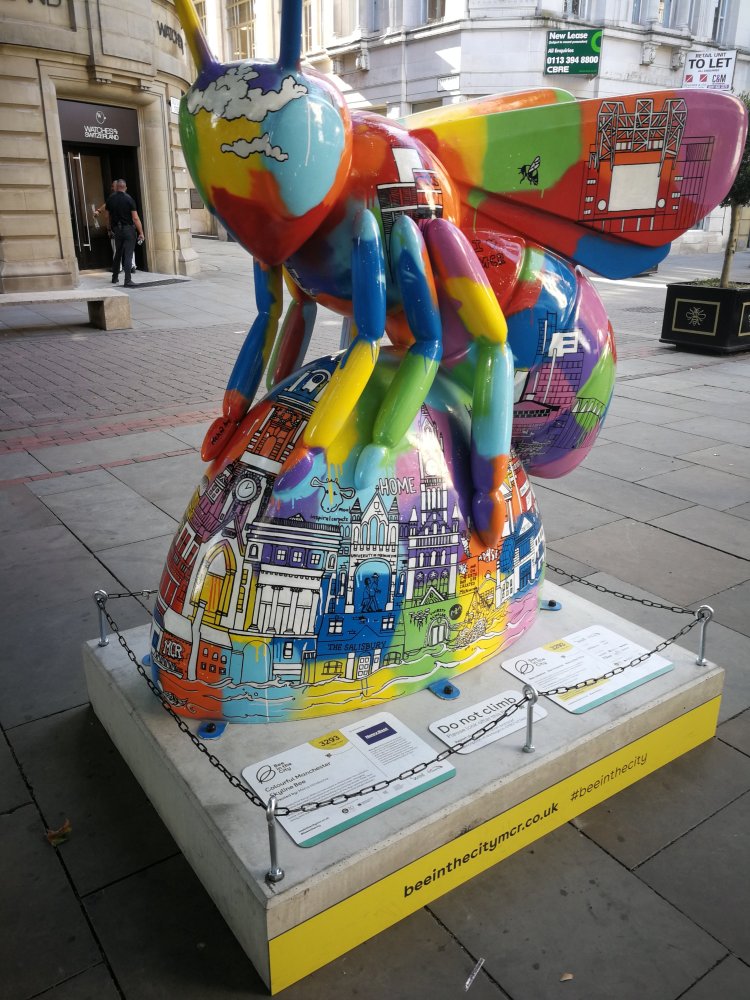 At the other end of St Ann’s Square is The Homing Bee which was designed by C’Art Dawes. The inspiration for this bee came from the artists own experience of almost being homeless. 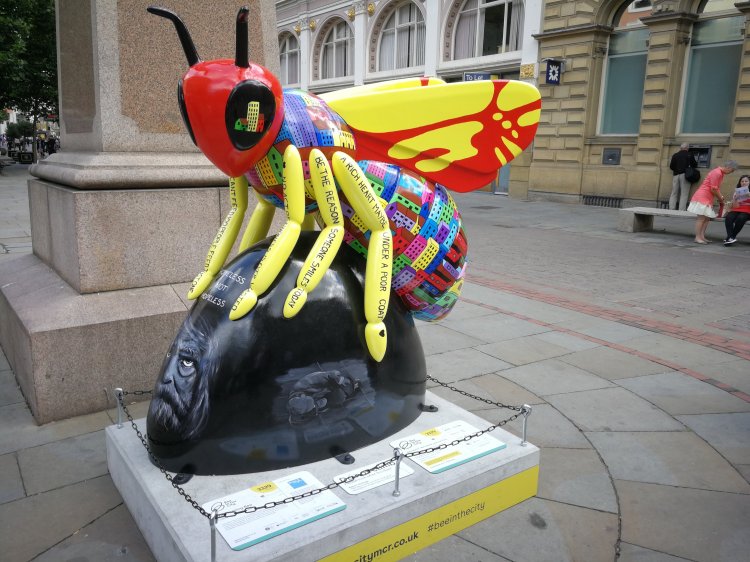 There was plenty of bee related family fun to be had this weekend, in Manchester Arndale there was storytelling and songs for the children. 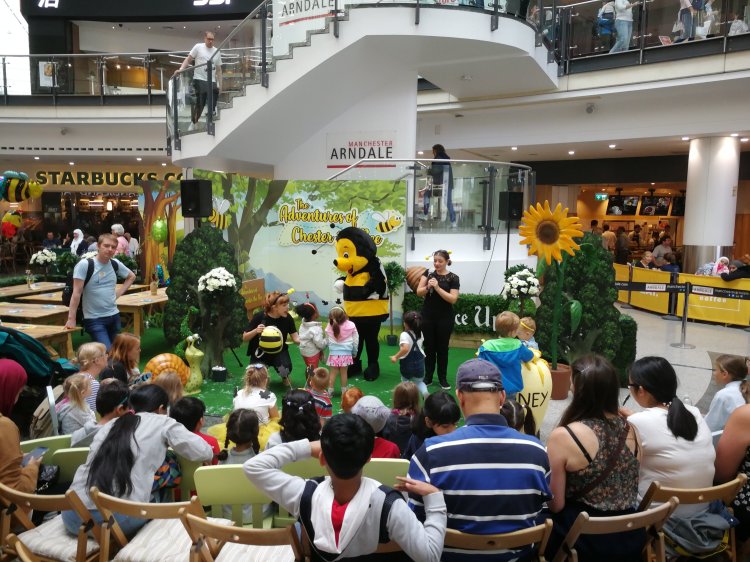 Outside the Lego shop (where we spent 45 minutes as Joshua had birthday money to spend) we found this pretty Busy Bee. This bee was designed by artist Betti Moretti, who lived in Manchester in her University days. The bee was inspired by those days- music, parties, friendships etc. 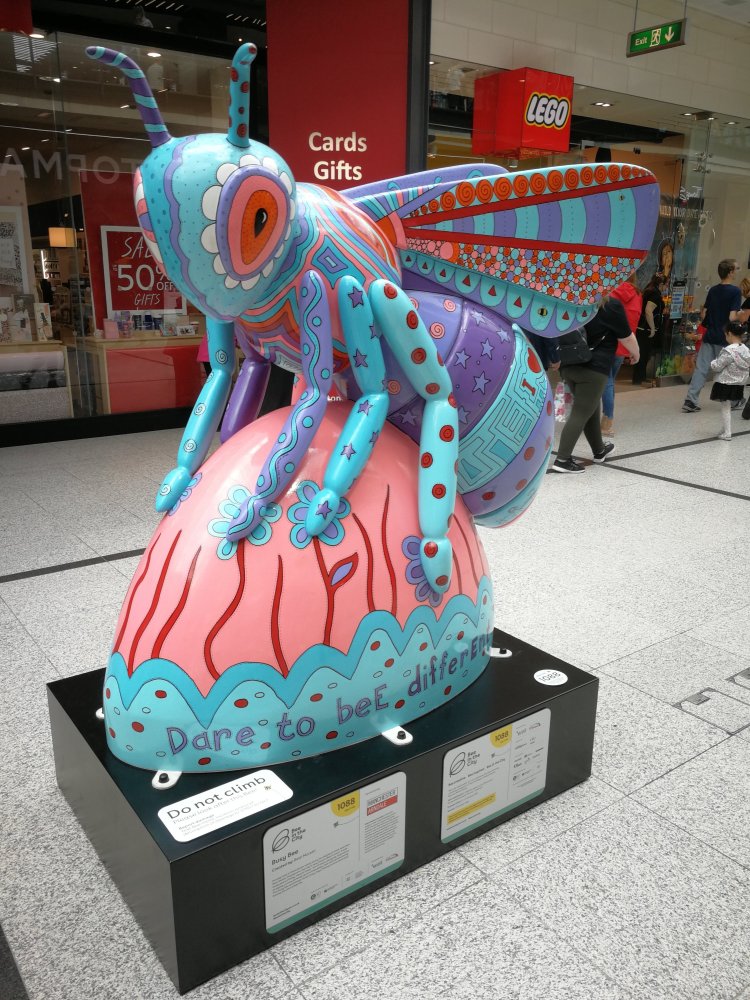 We found a couple of bees on Market Street, this next one also being a favourite of mine. I love the striking colours and the bold shapes. This fantastic bee was designed by Art + Believe and the bold, bright geometric shapes represent the vibrant, strong and diverse culture of Manchester past, present and future. 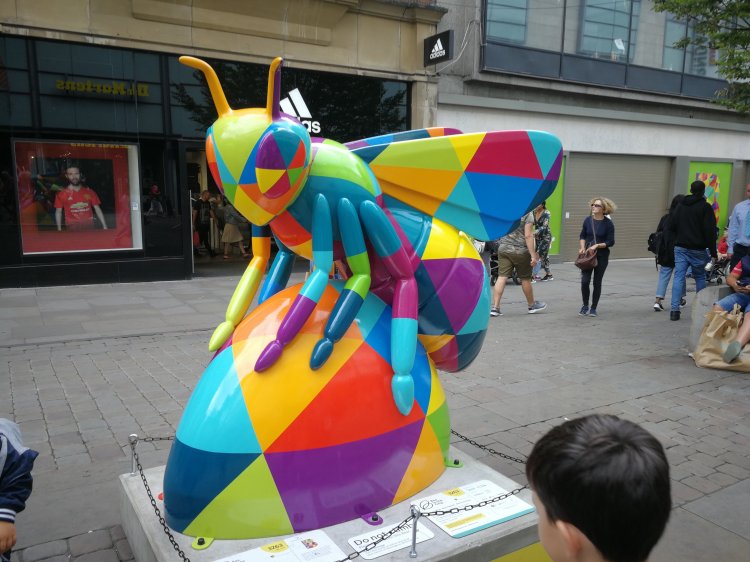 Also on Market Street was Rutherford, Turing and Beyond which was designed by Rob Catterall. This bee recognises some of the great Manchester inventors including Ernest Rutherford and Alan Turing. 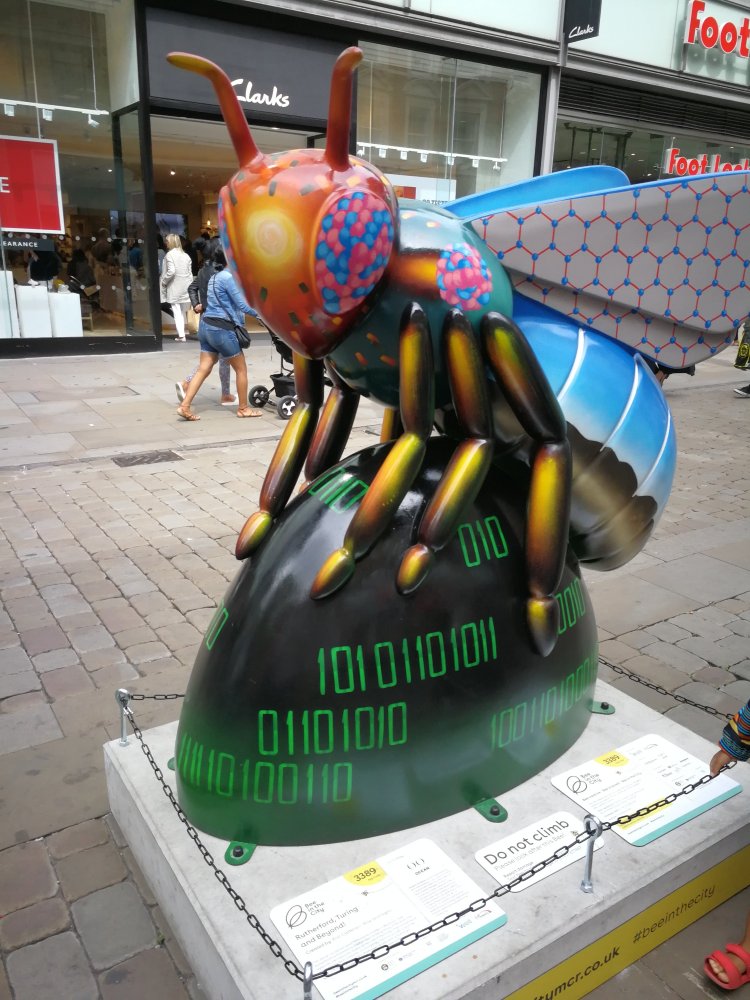 We headed back to St Ann’s Square as we walked towards King’s Street but came across this fabulous Queen Bee in the The Royal Exchange Arcade. Designer Lee O’Brien, thought the ‘Queen Bee’ would look great in the Tudor Style of Queen Elizabeth I and I agree, we loved this very glamorous bee! 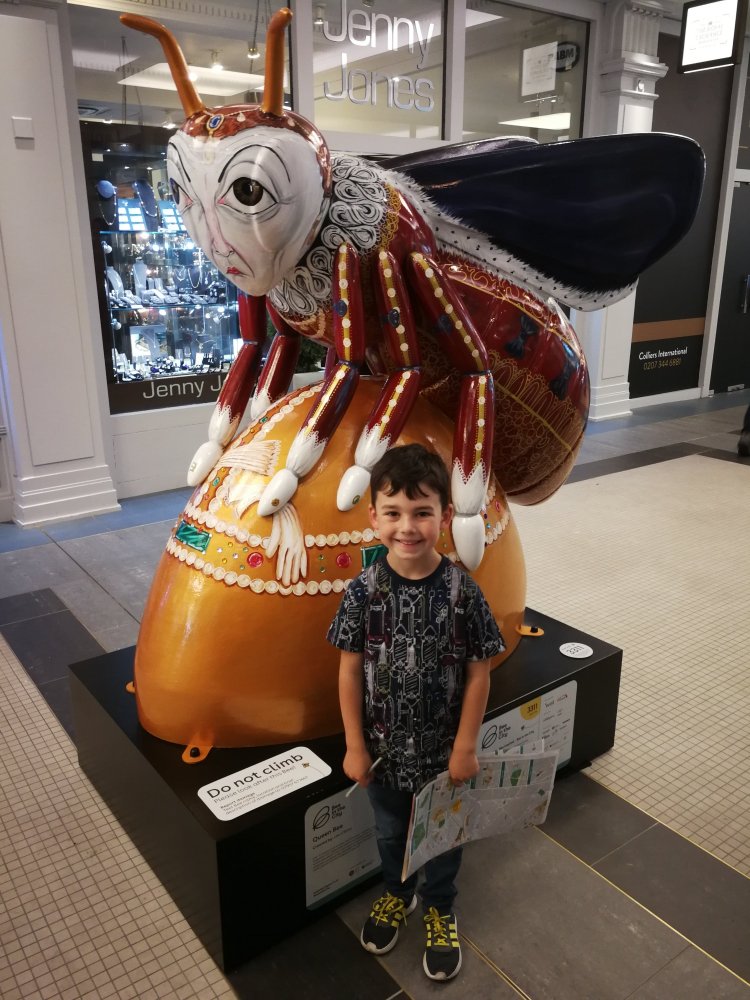 This bee and window display was very eye-catching and looked fantastic as you walked past. This very pretty bee in the window of the House Of Fraser was designed by Kathleen Smith. This design shows bees, butterflies and dragonflies making their home around the buildings of Manchester and by growing plants and trees you can provide a place for wildlife to flourish, making the city a better place for everyone! 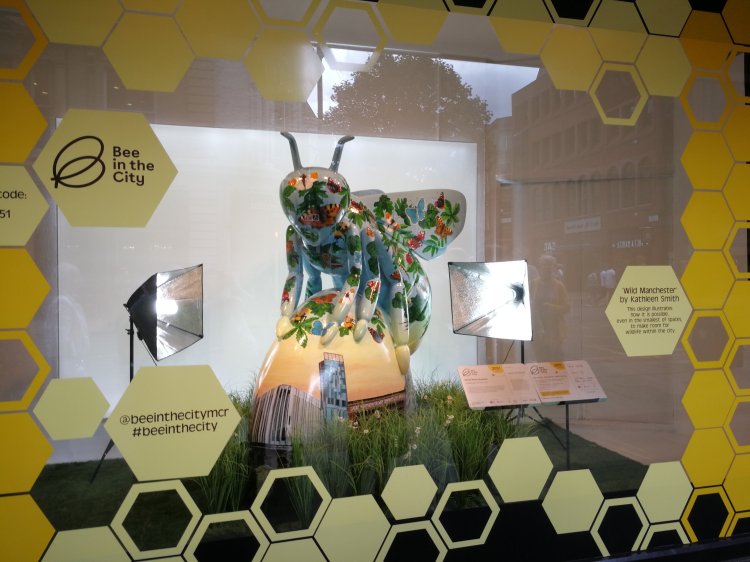 We ended the trail on King Street as it started to rain. The USBee was the final bee we saw that day and was designed by Fiona & Neil Osborne. the inspiration for this design came from Manchester’s growing reputation from technology. 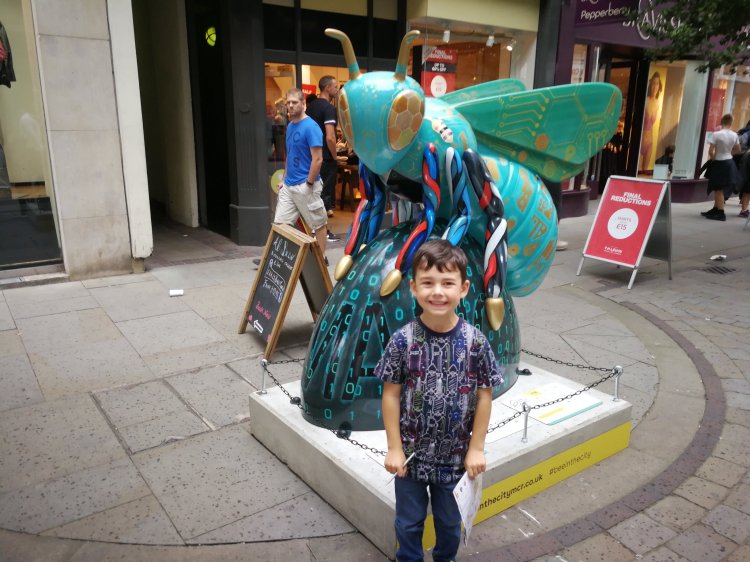 As well as over 100 Big Bee’s, there’s over 130 of these little bees over the city, nesting in ‘Creative Clusters’ in Museums, Galleries, Libraries and Shopping Centres. We will definitely will be back to look for more of the Bee’s and will have to start looking for some of the small ones!

Check out the map and more information here and start your family fun trail today!

13 thoughts on “Bee In The City Trail – Free Family Fun”